This is my work in progress on the Coolkatz Tudor Alley. I love this so much!

The Elizabethan era is my favourite era so how could I resist this beautiful Intrigue?

I haven't finished this one yet but here is my work in progress so far.

One side of the alley was decorated in classic black and white wattle and daub. The walls were painted roughly, allowing brush strokes to show through, and to give it a more authentic look. I  used Paper Artsy Cloud 9 so as not to make it too pristine. Similarly the black wooden beams (which are already scored into the mdf and/or have pieces of individual mdf which you stick to the walls to create a brilliant 3D effect) were painted dark brown, over which I dry-brushed black gesso, which was then wiped, sanded a little, and the layers built up to make it look like wood. 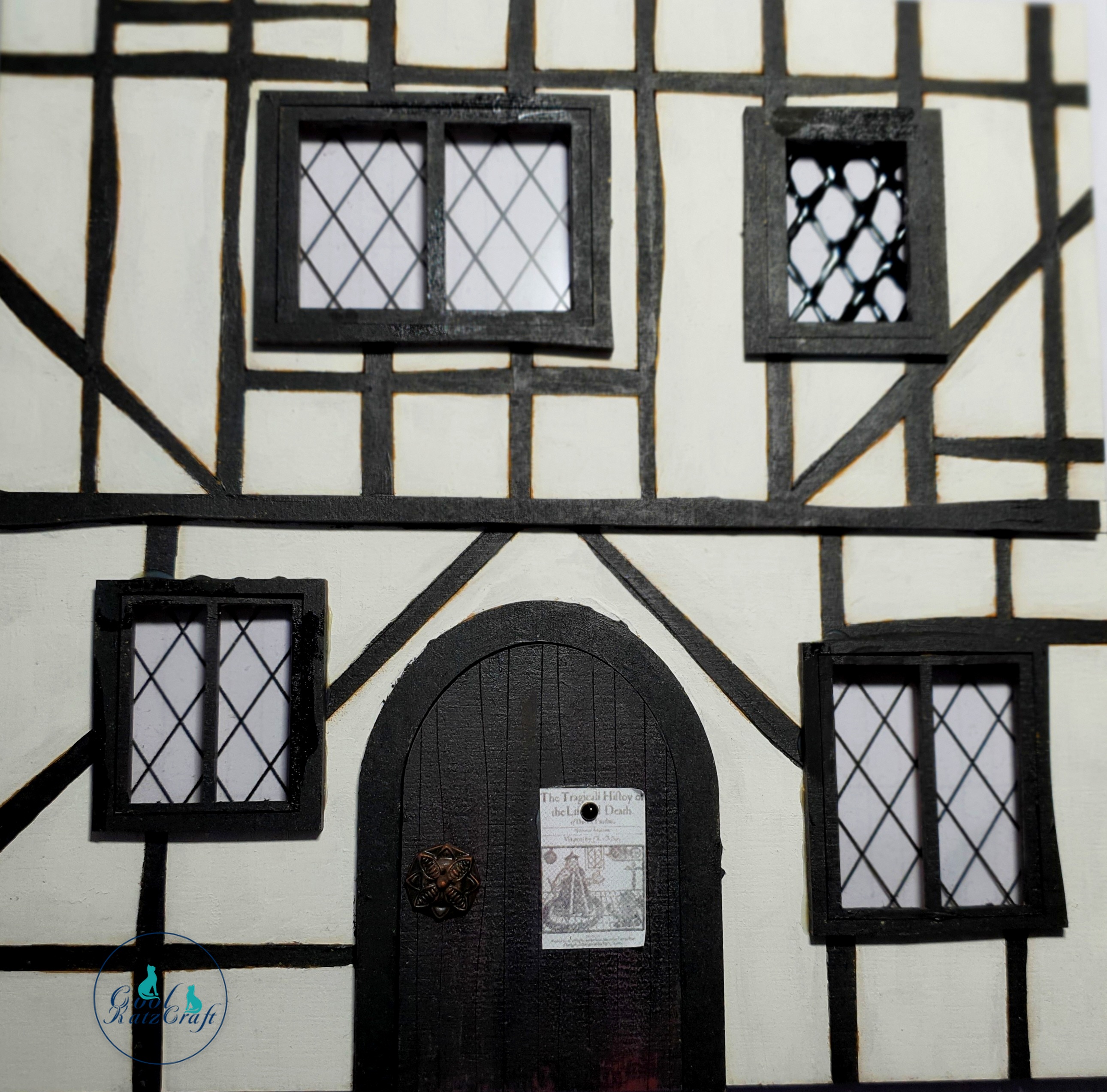 This beautiful door was scored so the wood planks were easy to make stand out. The doorknob is a brad from my stash. The poster the title page from a very old copy of Dr Faustus. 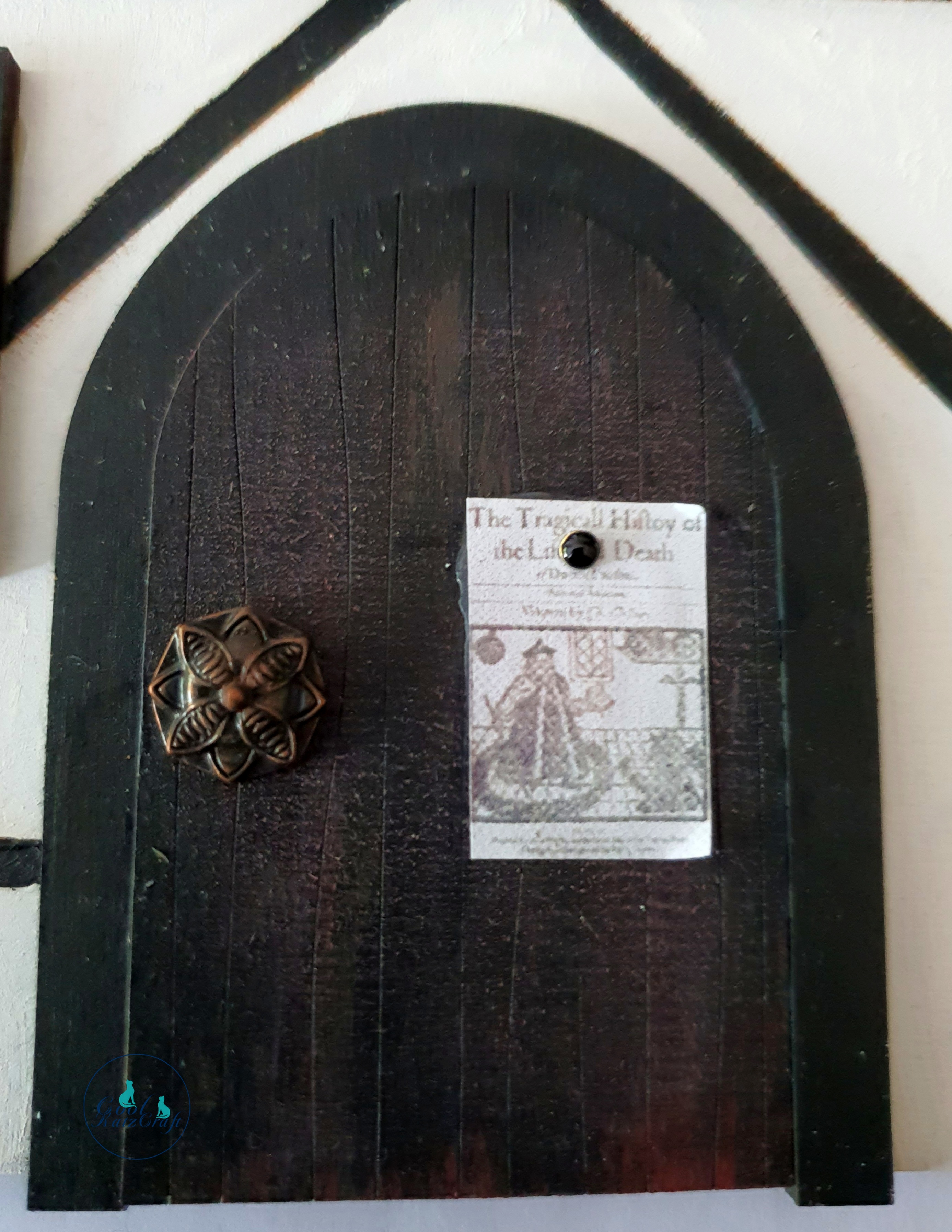 I found some acetate that had a diamond pattern that looked perfect for the windows. But they looked too pristine, so I am in the process of following the lines with some enamel accents to make them look more Tudor-y! Of course, I decided to do this after I had stuck the acetate to the back of the windows; so attempted it in-situ in the top right window, as you can see. It then occurred to me that as the acetate was only stuck on with double sided stick tape, I could take them off, do them, and then stick them back on (still a WIP).

The alley’s floor was made using the Coolkatz Cobble Path Stencil covered in Stamperia MixMediaArt White Modeling Paste, which was painted in a mixture of greys with dabs of brown on top. Unfortunately, (again this was a work in progress) I made the rookie error of covering the whole thing with bumps, including the sides where the buildings should go. So, the next stop will be to cut away some of the bumps so the buildings will fit on top of them and not come over the top of the booknook! Do Not Do This At Home. Listen to Maggie and Kay!

The other building is modelled on similar buildings on a particular street in my home town of Norwich, called Elm Hill. This is full of Elizabethan buildings, and I love the patterns of some of the brickwork there. So, I have recreated one of these patterns and yes, they are wonky; they are hand drawn and hand coloured, but the ones on Elm Hill are wonky too. So I feel I'm in good company. I made the background much more of a cream colour and the wooden parts brown. The door has touches of red to make it look worn and I put little circles of 3D paint in rows down the door to make it look like it had rivets. Again, the doorknob is a brad. I popped a picture of a Tudor interior in the top window. 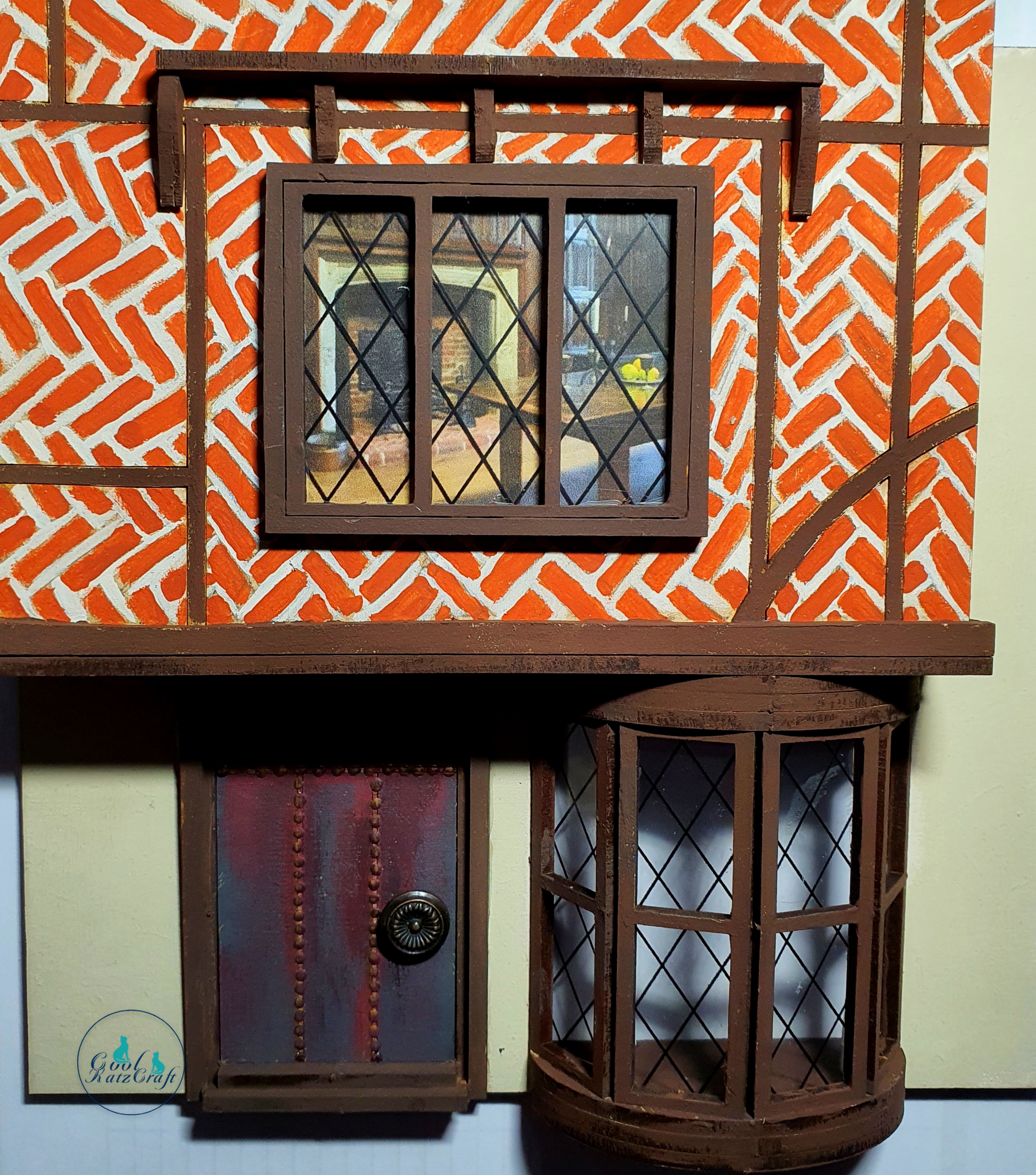 There are a few of the bits and pieces I plan to put one I have finished all the little odd jobs that are left. The sign has a Tudor Rose on it and that’s because this is the alleyway down the back of the Rose Theatre in Elizabethan London. The buildings, I decided, hold props and stage scenery used in the plays. Today at The Rose they will be playing Christopher Marlowe’s Dr Faustus. In the window of the prop room there will be swords (bought), crowns (hair embellishments), chains (old bits of jewellery), a pile of golden plates and some golden wine goblets (plates die cut using the Coolkatz Mini Plate Die Set, goblets from the Coolkatz Miniature Glassware Set, both coloured in with gold chisel pen), an anchor and, hopefully, a hell-hole for Dr Faustus to be dragged down at the end of the play. And anything else I suddenly think of. Some green divots will pop up on the cobblestones and on the walls I expect too. 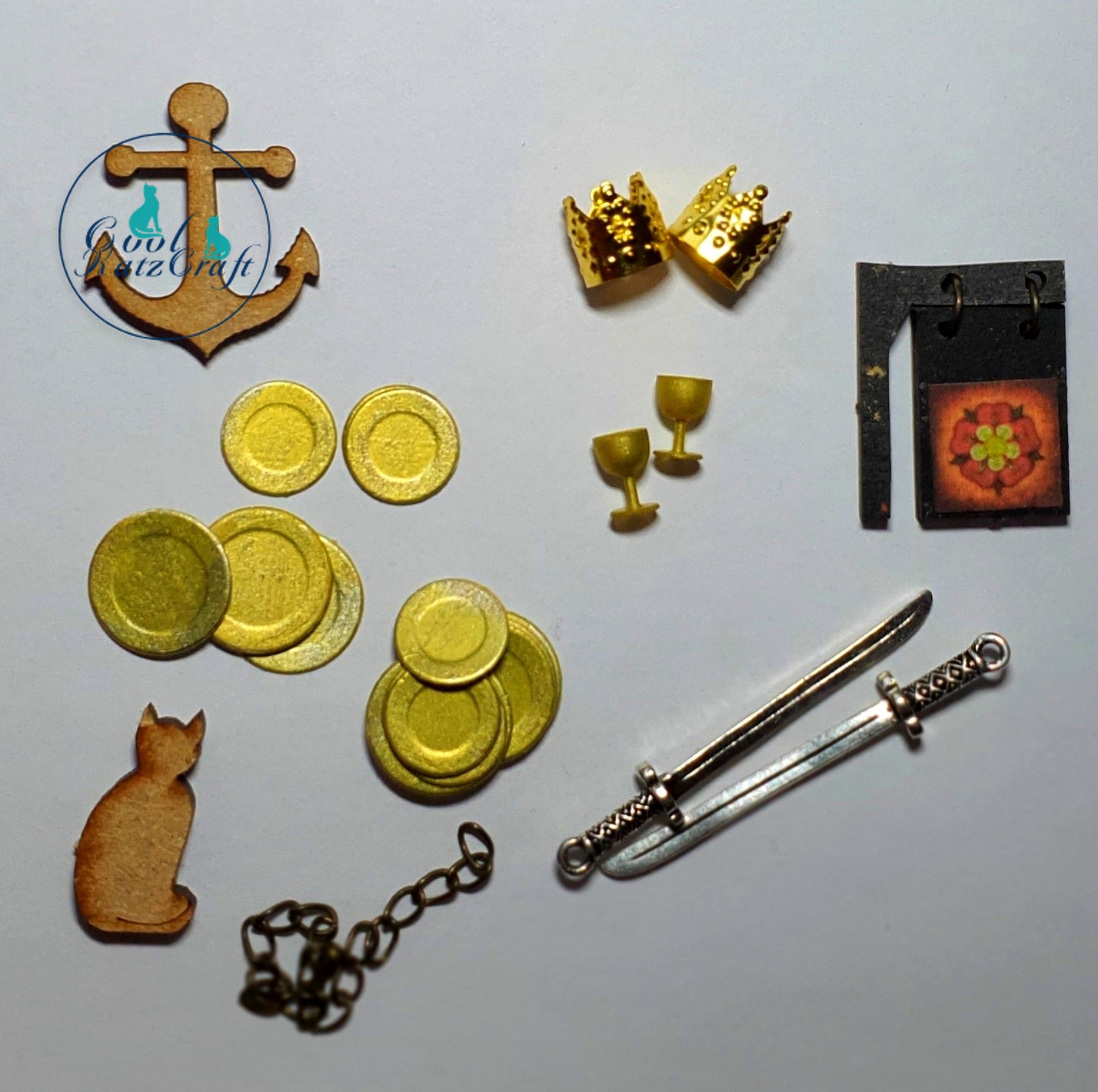 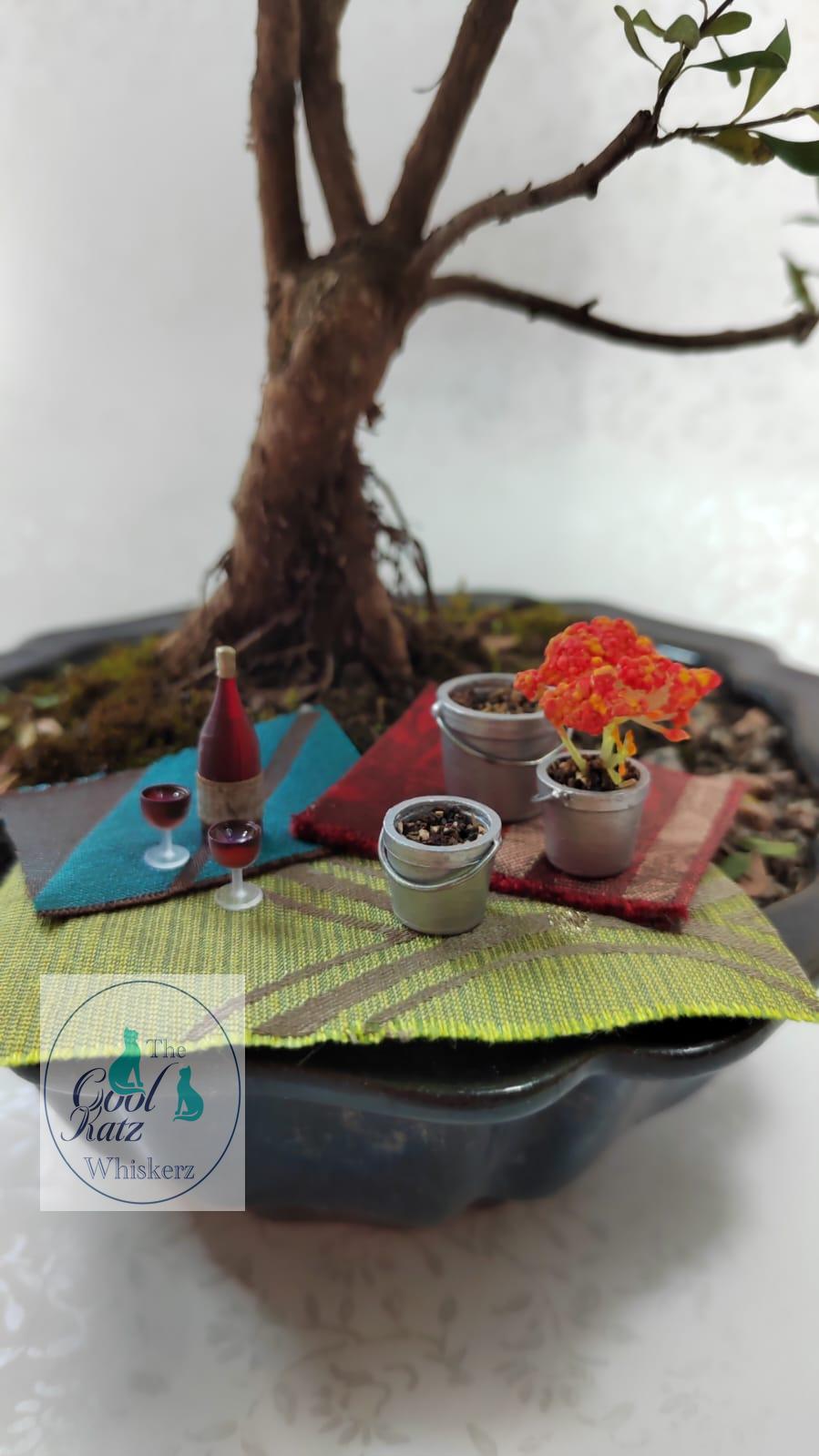 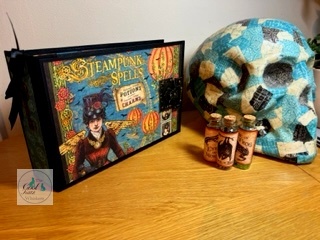 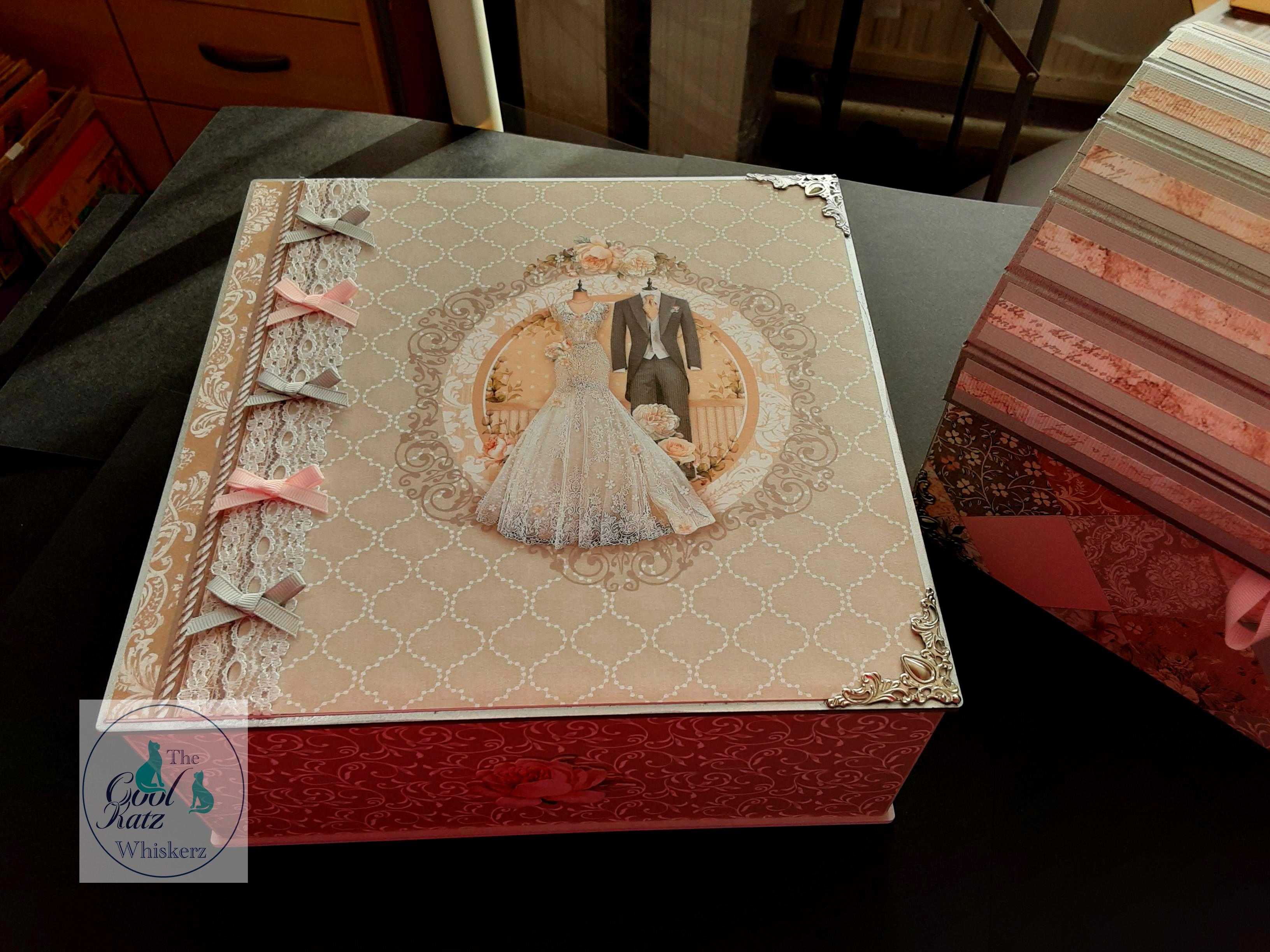 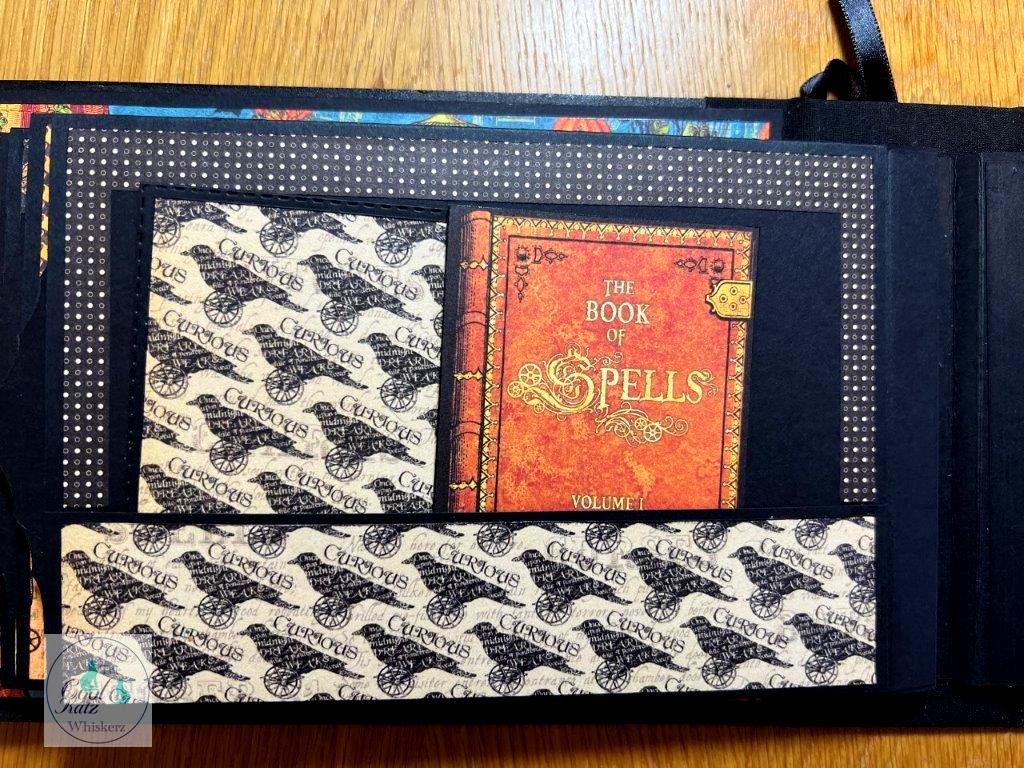 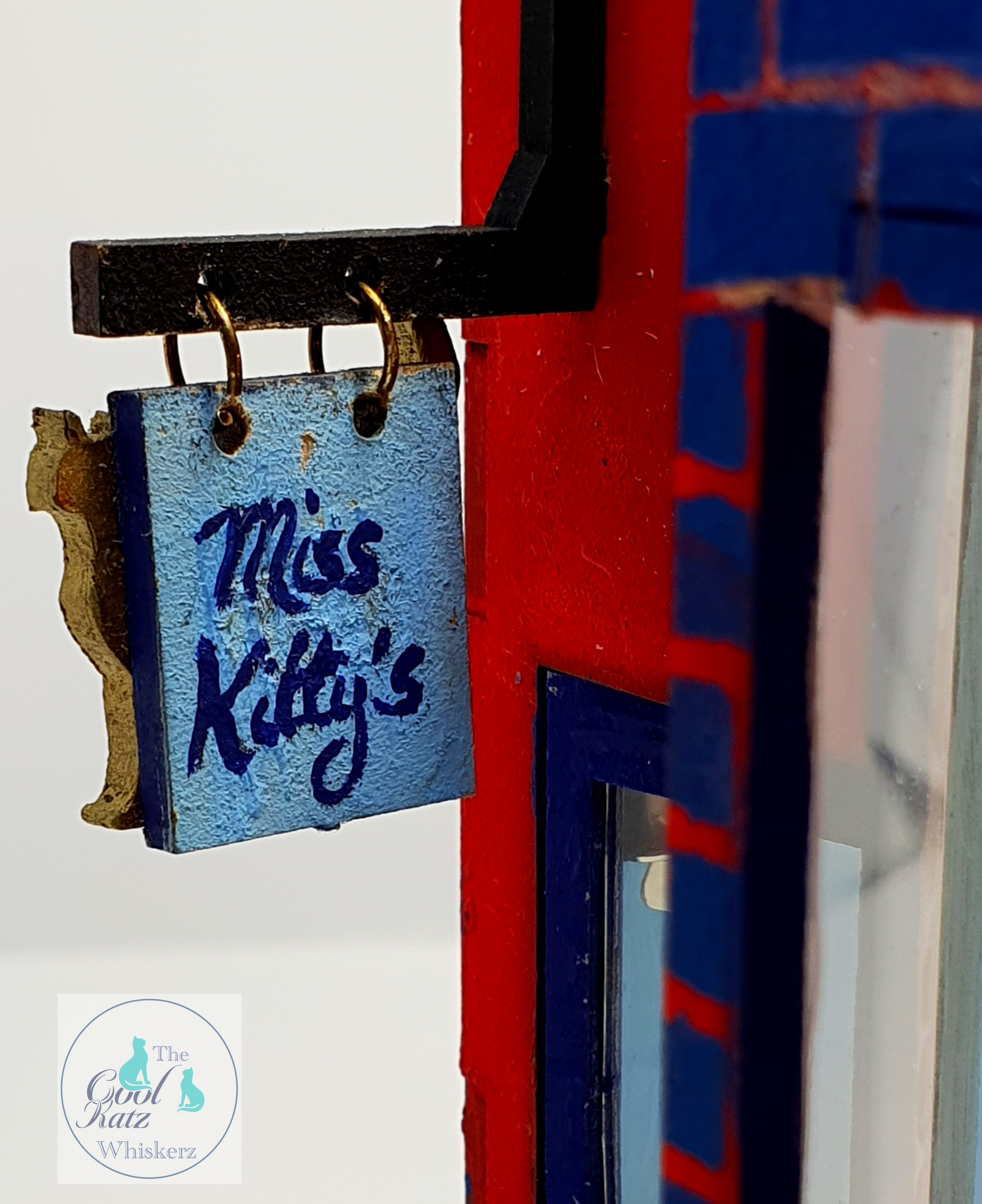 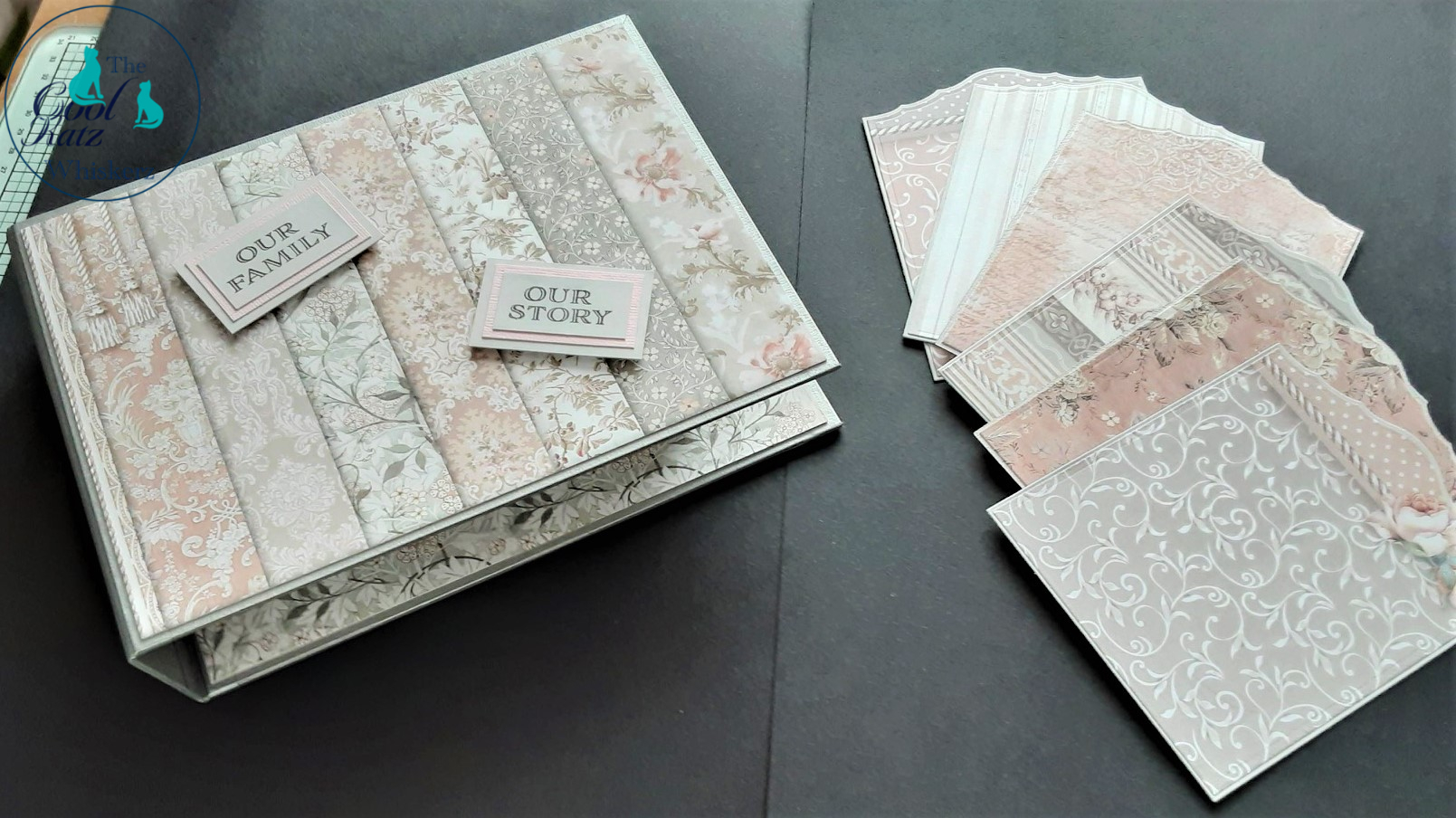 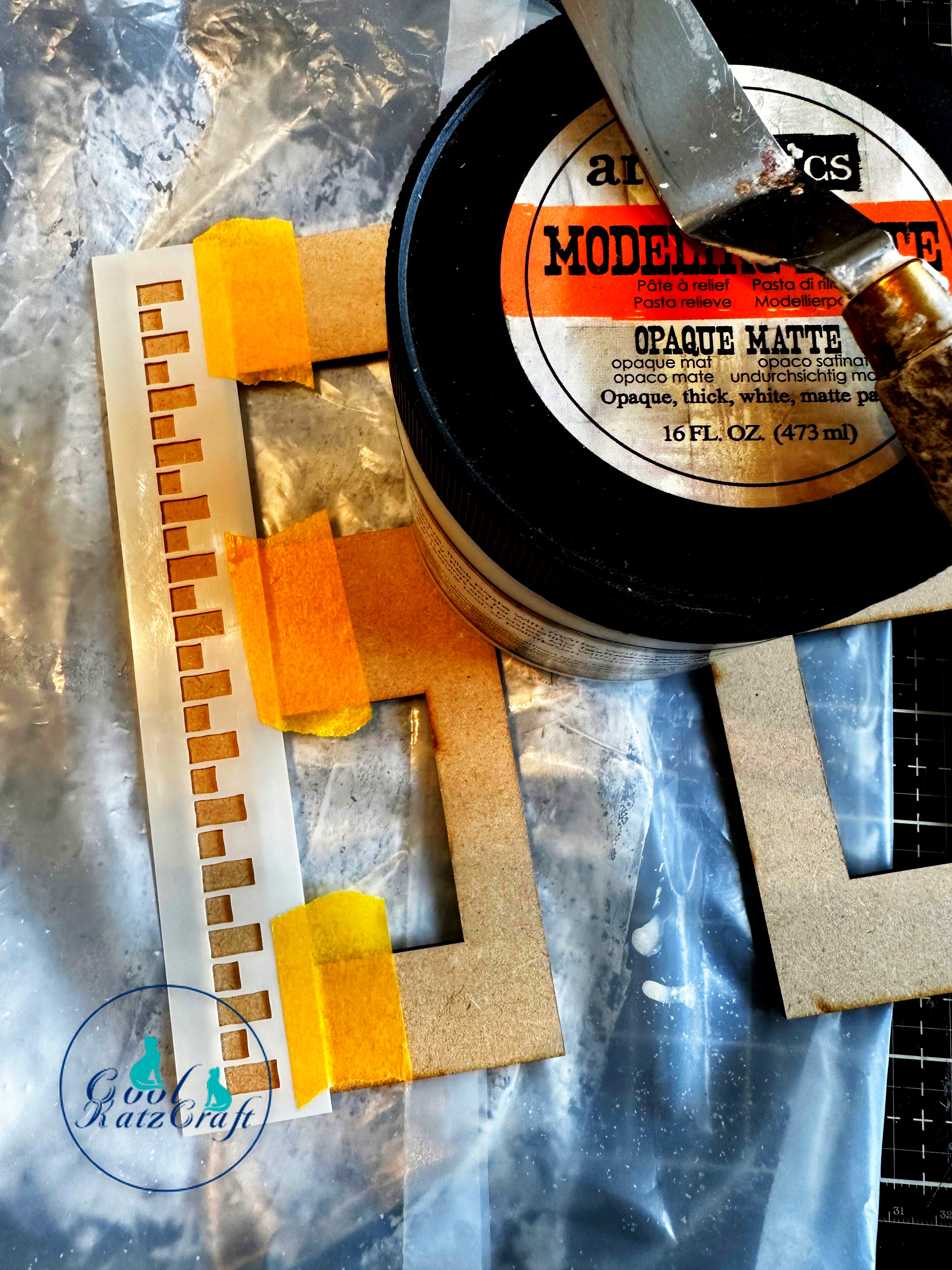 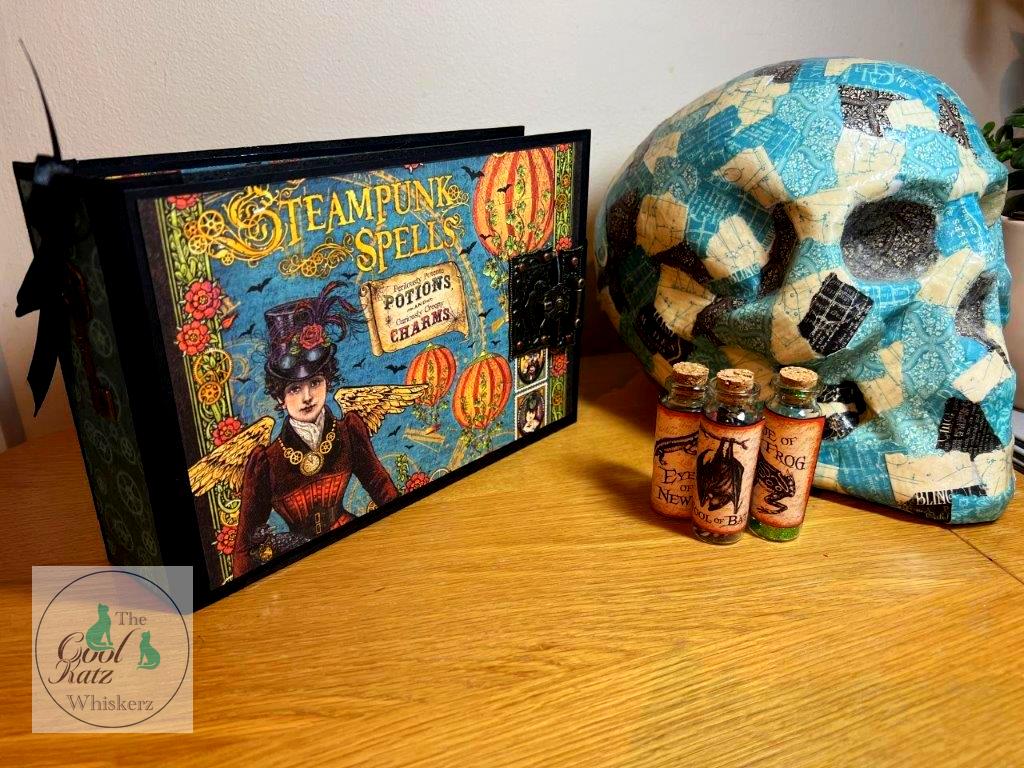